Exploring Monokle — a desktop IDE to work with your Kubernetes manifests

As I pursued ways to make life better (or, rather, more comfortable), I started looking for a solution that would help me write Helm charts. It was also supposed to improve my understanding of dependencies: what values are substituted in the charts and where they come from. Amid my research, I came across a program called Monokle. Its description reads: “Monokle is an open-source desktop tool that takes the grunt work out of working with your Kubernetes manifests. It allows you to quickly find any incompatibilities or incorrect code and deploy your charts directly into the K8s cluster.” The description looked intriguing, so I proceeded to install it.

Monokle is mostly an Electron app with a dash of React and TypeScript. The project was published on GitHub on April 21, 2021. It is being actively developed and has racked up more than 700 stars. It supports plugins as JSON files (aka templates) that help create resources. Currently, it can create the resources such as Basic Pod, Basic Job, Basic Service, Deployment, and StatefulSet + RBAC. However, the selection of plugins available out of the box is relatively sparse.

Monokle offers the following features out of the box:

First, I downloaded the appropriate distribution. Once the installation was complete, Monokle offered me three choices: open the current chart directory, create the manifest from scratch, or use the template to create a set of resources.

I opted for the first option and specified a directory that I used with werf (an Open Source tool for building applications and deploying them to Kubernetes; it uses Helm under the hood), which already had YAML templates.

That’s when things got messy. I was able to open the directory, but it only had a few select *.yml or *.yaml files, and I could not determine what the criteria being used to screen them were. For example, I had no luck opening the .gitlab-ci.yml file, no matter how hard I tried. The fact that you cannot open and edit *.tpl files containing additional logic was very frustrating. In the end, I realized I was doing it all wrong and started all over again from scratch.

Before I continue, I would like to mention a few things regarding Monokle interface.

The program window is split into columns: the first one is used to review the project structure, the second one allows you to view the resources that will be created based on the charts, and the third one is the editor.

Now, let’s come back to try it out.

This time, I clicked on “Create a manifest from scratch.” I created a new project directory and copied some template files into it. In my opinion, some of the most popular templates include Advanced Pod, RoleBinding and Service Accounts, as well as Basic Kubernetes StatefulSet. I decided to go with Advanced Pod to understand how the process works and what would come next.

Ultimately, I ended up with a base to start working with. However, I think there is room for improvement in terms of flexibility when you create a project from scratch. While you can outline some things and even deploy them to a cluster, it still might be better. Currently, you’re just getting a bunch of files without any structure.

Since Helm is more common for me, I decided to opt Helm for my test project in Monokle. Its template was created using the helm create mytestproject command. The command also filled the Helm Chart tab with all the necessary data and enabled the Install button in the upper right-hand corner to install the Helm chart to the Kubernetes cluster.

For the second run, there was only a Deploy button, which does almost the same thing. But if you use it, you will have a hard time figuring out what resources have been deployed to the cluster. On top of that, K8s will not monitor whether those resources are healthy or not.

Finally, I was getting closer to what I wanted to see: the structure in the left column resembled the one I usually work with. A full-fledged project template had thus been created!

When the values.yaml file is selected, the Preview button appears on the right. If you click on it, the templates will be filled with the values from the file. This is how the created chart looks:

My Monokle’s current state switched to Helm Preview. In this mode, in the middle Navigator section, you can preview the resources to be created in the cluster. As the name suggests, this mode does not allow anything to be edited. However, you can deploy the generated resources to the Kubernetes cluster to see if there are any inconsistencies.

Next, I decided to deploy something to the Minikube cluster running on my computer. Now it was the Install button’s turn: select the values.yaml file and then either go to Helm Preview and see what resources will be deployed or, if it is a ready-made chart, all you need to do is install it.

Since I didn’t customise anything, another dialogue box popped up:

Once the new test-helm namespace was created, it was time to deploy the Helm chart. It was successful:

I could go on and on about Monokle interface, how to create resources, how to edit them, how to compare chart contents with cluster resources, etc. However, I’ve decided to stop there and sum up the experience.

Below are some features of Monokle that I really liked, and that might be reason enough for you to take a closer look at this product (which it certainly deserves!): 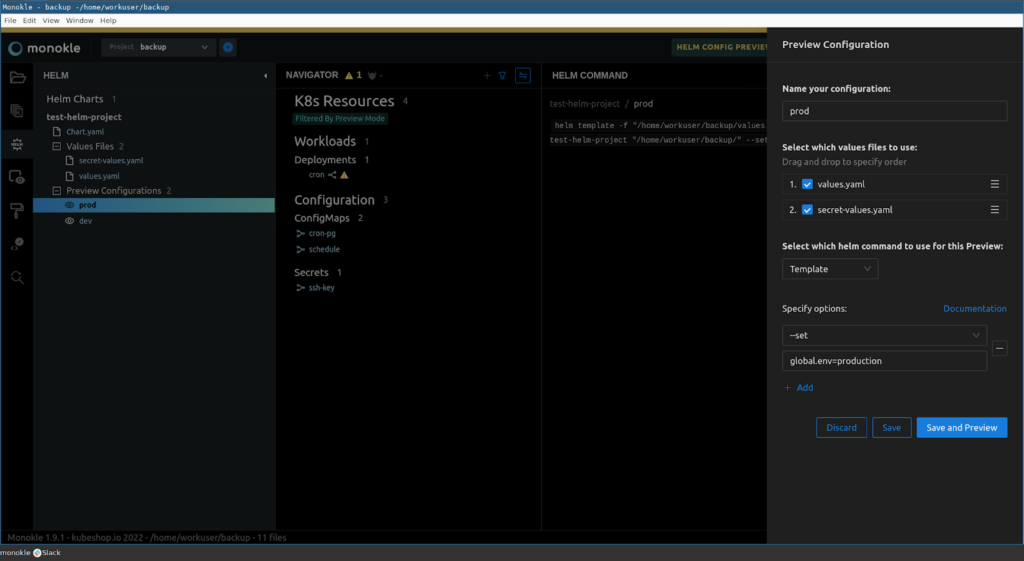 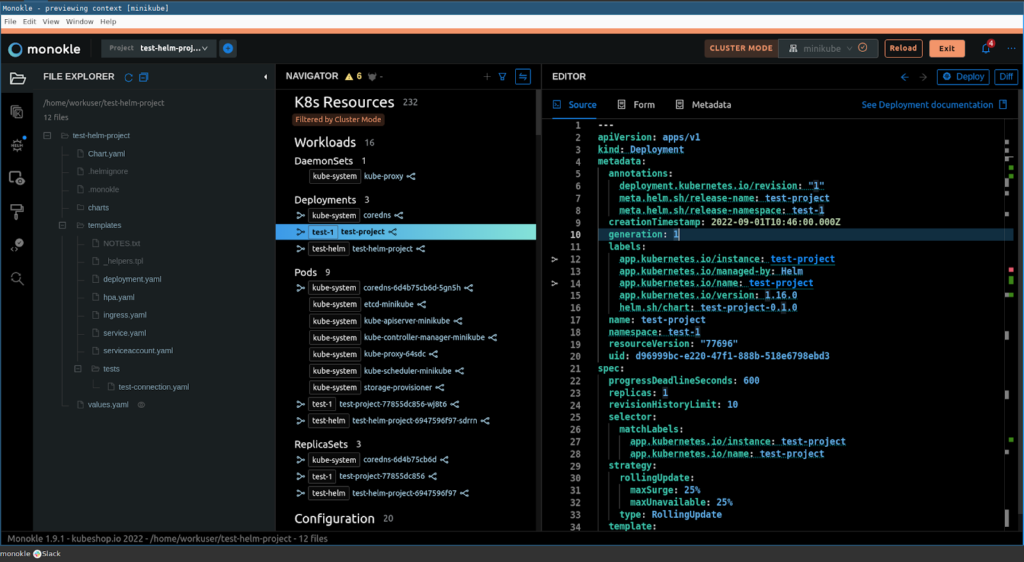 And that’s just some of them ­— I am sure there are many more features you might like.

As a side note, it is also worth noting that Monokle is incompatible with werf’s directory and template structure. So for me, it did not prove as helpful as I had hoped. I was also a little overwhelmed by the very different approach to creating charts/project structure. However, that does not mean much for many others, I guess.

In this article, I shared my experience trying out Monokle, a highly specialized editor for Kubernetes configurations defined with Helm and Kustomize.

Monokle has a good set of tools for creating almost any Kubernetes resource, and you can easily locate the entity you need. The tool may come in handy in mastering K8s — you can use it as an interactive reference. If you already have Helm charts, I definitely suggest you take a closer look at Monokle, too. Will it be sufficient for your specific case? Try it to see.

Thanks to a group of active contributors, the project is rapidly gaining momentum and acquiring new features. Even though some of them seem to be currently missing, there is a good chance they will become available in a future version. Its ecosystem is growing fast — here are two prominent announcements during the last two months alone: