A modern approach to operation solves many challenges that businesses face today. Containers and orchestrators facilitate scaling of projects of any complexity, simplify the release of new versions, making them more reliable… However, they also pose additional challenges for developers. The common programmer primarily cares about its code: the architecture, the quality, performance, and even elegance. He is far less concerned about deploying it to Kubernetes as well as testing and debugging it there after making some even the smallest changes. That’s why we see a lot of new Kubernetes tools that help even the most old-school developers solve their problems while allowing them to focus on the global picture.

So here is a short review of various tools that make life easier for a common developer that has its code running in the pods of a Kubernetes cluster.

This kubectl plugin allows you to run an additional container in a pod of your interest. The new container will share namespaces with the target container(s). With it, you can debug all aspects of pod’s operation: check the network, listen to network traffic, diagnose the process that you are interested in via strace, etc.

You can also enter the process container by executing chroot /proc/PID/root — this option is very convenient when you need a root shell in the container whose manifest has securityContext.runAs set.

The tool is simple and efficient and might be quite useful for developers.

P.S. It’s also worth mentioning that the latest Kubernetes release — v1.16 — has brought the “ephemeral containers” feature (currently in alpha) that implements pretty similar functions to the core. Thus, it’s expected this plugin will be replaced by the native command (kubectl debug) soon.

Telepresence allows to run an application container on a local user machine. In this case, all traffic from the computer to the cluster and vice versa goes through the proxy. Such an approach allows for fully local development via modifying files in your favorite IDE: you will see results immediately.

The advantages of running containers locally are many: the convenience of work, instant results, ability to debug an application habitually. However, there are some disadvantages: high requirements for stability and speed of the network connection which is especially evident for high-RPS and heavy-traffic applications. Also, Telepresence has some issues with volume mounts under Windows, and this could be a major obstacle for developers accustomed to this OS.

P.S. In general, we advice Telepresence to some of our customers (developers) and they are pretty happy with that. This tool is hosted among CNCF Sandbox projects. As a popular alternative to Telepresence, you might also consider Skaffold described below.

Ksync helps developers to sync files between a local folder and a folder in the container of a Kubernetes cluster. This tool is perfect for developers that use scripting languages whose major hurdle is delivering code into a running container. Ksync solves this problem.

During initialization with ksync init, the DaemonSet controller is created in the cluster. It helps to monitor the state of the filesystem of a selected container. The developer then runs ksync watch on a local machine. It watches config files and launches syncthing to manage the actual file syncing to the cluster.

Finally, you need to select folders for syncing to the cluster. For example, the following command:

… will create a watcher called myproject. It will look for a pod with an app=backend label and will try to sync the /home/user/myproject/ local directory to the /var/www/myproject/ directory in the php container.

Here is our experience with ksync (and some useful suggestions):

This tool is intended for debugging processes directly inside the pods. It is easy to use and allows you to interactively select the desired debugger (see below) and namespace/pod of the process of interest. Currently, Squash has support for:

Considering IDEs, there is support for VS Code (via this extension), however, plans for the current year (2019) include support for Eclipse and IntelliJ. (README in GitHub says “We will be updating our Intellij extension in early 2019,” thus there’s no confidence when/whether it’s going to be actually done.)

Squash runs a privileged container on the same node with the target process, that’s why you first have to learn more about the capabilities of Secure Mode to prevent security problems.

This tool is briefly described as “a missing part of a CI/CD system” and aims to improve the continuous delivery process complementing your existing CI system with building & deploying features. It implies a GitOps pattern using a Git repository as the single source of truth which should contain the full configuration of your application including instructions to build its images and infrastructure it requires to run (via Helm charts for Kubernetes).

With werf, you can build as many Docker images as needed for a single project as well as build one image from config on the top of another image from the same config. Building is available using Dockerfile or custom builder instructions. This custom builder offers many advanced features such as incremental rebuilds (based on Git history), using Ansible tasks or Shell scripts for building, sharing a common cache between builds, reducing image size.

Your images can be published in one or several Docker registries following different image tagging strategies. Registries are then cleaned via customizable policies and images still used in Kubernetes clusters are kept.

The major features of deploying these images to Kubernetes include:

P.S. There is another project associated with werf — kubedog — as it’s used internally to watch Kubernetes resources. However you can benefit from it in your CI/CD pipelines without werf as well.

This solution is developed by the company with the same name, which also provides managed Kubernetes clusters for team-based development. Originally DevSpace was designed for commercial clusters, but now it works perfectly with any others.

When you run the devspace init command in the project directory, you will be prompted to (in interactive mode):

After all these preparatory steps, you can start developing by running the devspace dev command. It will build the container, push it to the repository, roll out deployment to the cluster, setup port forwarding, and synchronize your local workspace and the container.

Also, you will be presented with an opportunity to enter your container via current terminal. Feel free to use this feature since the container starts with a sleep command (while to actually test an application you will need to run it manually).

Finally, devspace deploy will deploy an application and related infrastructure to the cluster, and then everything will start running “for real”.

Project configuration is stored in the devspace.yaml file. Aside from settings for a development environment, you may find there an infrastructure description similar to Kubernetes manifests (yet highly simplified).

Furthermore, you can easily add a predefined component (e.g., MySQL DBMS) or a Helm chart to the project. You can learn more about this feature in the documentation since it’s pretty straightforward.

P.S. This Monday, the major update to DevSpace — v4.0 — has been released.

This tool made in Google claims to cover all the requirements of a developer whose code will be run in a Kubernetes cluster. It has a steeper learning curve than DevSpace: Skaffold isn’t interactive at all, it will neither detect your programming language nor generate a Dockerfile for you.

However, if it doesn’t scare you, here is a quite impressive shortlist of what Skaffold can do. It can:

Various Skaffold workflows are configured declaratively in the skaffold.yaml file. You can define several profiles for every project, where each profile sets specific parameters for the building and deploying stages. For example, you can configure Skaffold to use any basic image (of your choice) during development while change it to a minimal image for staging and production (plus use securityContext for containers or redefine cluster where the application will be deployed).

Particularly noteworthy is the ability of Skaffold to test containers. The aforementioned container-structure-test framework provides several methods of validation:

However, syncing of files with the container is implemented in a sub-optimal way: Skaffold simply creates an archive containing source files, copies and unpacks it in the container (where the tar utility has to be installed). So if your primary objective is code syncing, then you are better to choose a more specialized solution (like ksync). 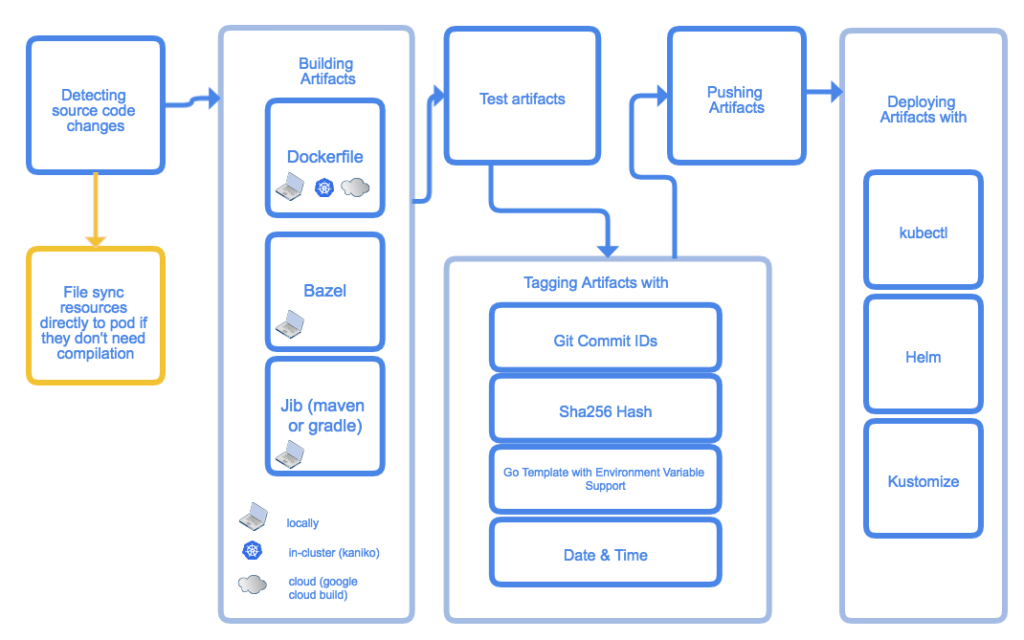 Overall, this tool’s lack of abstraction from Kubernetes manifests and interactivity makes it quite difficult to master, though this disadvantage is somewhat compensated by greater freedom of actions.

Like some other tools mentioned, Garden aims to automate the process of delivery of application code to the K8s cluster. To do this, you first have to describe the project structure in a YAML file, and then run the garden dev command. It would do all the magic:

This tool is best for a team-based shared development in a remote cluster. In this situation, you can use a build cache for some already done stages, which significantly accelerates the whole process, since Garden will be able to reuse the cached results.

A project module can be a container, a Maven container, a Helm chart, a manifest for kubectl apply or even an OpenFaaS function. You can pull any module from the remote Git repository. A module may or may not define services, tasks, and tests. Services and tasks may have dependencies, so you can define the sequence of deployment of some service, reorder tasks and tests.

Garden provides a beautiful dashboard (experimental feature) that gives you a full overview of your project: its components, build sequence, the order of tasks and tests, their relationship and dependencies. Also, you can view logs of all components right in the browser, check the HTTP output of the selected component (ingress resource should be defined for it) and more.

This tool also has a hot-reload mode, that synchronizes code changes with the container in the cluster while significantly accelerating the application debugging process. Garden has good documentation and an extensive set of examples which help the user to get comfortable with the tool and start using it.

P.S. We can also recommend our readers this rather amusing article written by one of its developers.

Surely, the list of tools for developing and debugging applications in Kubernetes isn’t limited to those described in this article. There are numerous very useful and practical tools worthy of a separate article or, at the very least, a mention. Please, share the tools you use, problems you have encountered, and possible solutions!